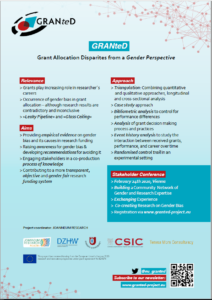 The CASPER project will examine the feasibility of establishing a European award/certification system for gender equality for Research Performing Organizations. Based upon an extensive assessment of available systems and needs across Europe and beyond, we will develop and evaluate three possible scenarios that pave the ground for a realistic EU wide award/certification framework.

CALIPER
CALIPER vision is to enhance the gender balance in STEM fields and promote a greater engagement of female researchers with research and innovation, contributing to the ERA priorities on Gender Equality and stimulating a dialogue and collaboration between academia, public authorities, professionals and industry players in order to tackle gender inequalities across the research- transfer-to-market chain.

GEECCO
GEECCO (2017-2021) is a project which brings together a consortium that is characterized by the focus on the STEM field. Its goal is to increase the number of research performing and funding organizations that start to implement gender equality plans.

GEARING ROLES
In line with the call goals GEARING-Roles (‘Gender Equality Actions in Research Institutions to traNsform Gender ROLES’) targets the questioning and transformation of traditional gender roles at the micro, meso, and macro levels.

GENERA is a Horizon 2020 project aiming at continuing, monitoring and improving the Gender Equality Plans of Research Institutions and Organisations specifically in the physics research field. These three actions will be performed by a Consortium of 13 beneficiary partner Research Performing and Research Funding Organisations and a number of associate partners and observers.

GENDER-NET Plus
Despite efforts to reduce fragmentation across the European Research Area, the European scientific system is still facing challenges in achieving gender equality and gender mainstreaming in research and innovation. In this context, and in line with ERA policy goals and national contexts, the GENDER-NET Plus ERA-NET Cofund was launched September 15, 2017 and will run until 2022.

SUPERA
Supporting the Promotion of Equality in Research and Academia

Tools and ressources for gender equality in research